$35 Pre-registration only
*Members Only - No walk-ins 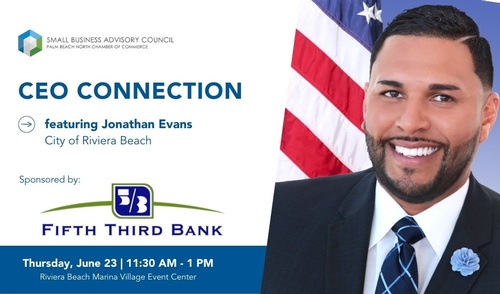 Join us for lunch at this member-exclusive event featuring Jonathan Evans, City Manager and CRA Executive Director for the City of Riviera Beach. Guests will enjoy an opportunity to network and learn more about Jonathan's background, experience, words of advice, hobbies and more. 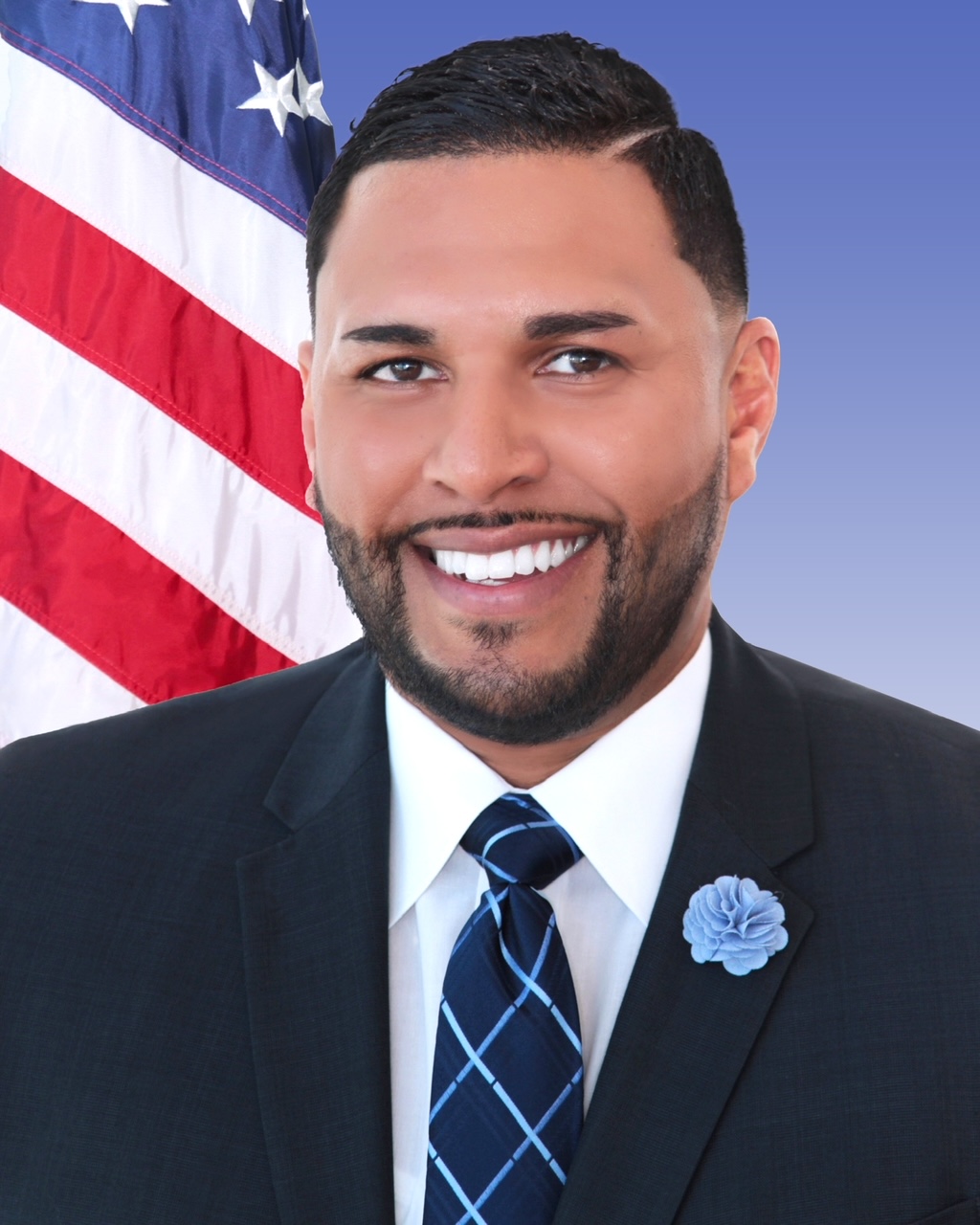 
Jonathan Edward Evans was born on August 25, 1980, in Port Chester, New York, to Mr. Vivian Alfred Evans and Ms. Edita Evans. Mr. Evans has one younger sister, Viviana Evans, as well as numerous other siblings: 14 half-brothers and six half-sisters from before his father met Mr. Evans’ mother. Mr. Evans is a first-generation United States citizen. His father was born in Manchester, Jamaica, and his mother was born in Bocas Del Toro, Panama. Mr. Evans’s father was an engineer, and his mother was a nurse and a U.S. Army Captain (Ret.). This sparked some interesting conversations about who had full control of the house. To Mr. Evans, this was easy: his mother clearly had the upper hand.

In 1988, Mr. Evans and his family moved from New York to Kissimmee, Florida, where they resided until he attended college. Prior to his 18th birthday, Mr. Evans’s family gave him an ultimatum: go to college or join the U.S. Army. This made his decision very simple: he decided to attend college. The most important attributes and characteristics that his family taught him are that hard work, dedication, and determination will carry you far, and no matter how daunting a task, as long as you keep a positive outlook on things, they will work themselves out. Mr. Evans’s father passed away in 2004 due to complications from prostate cancer. Instead of allowing this event to affect him negatively, Mr. Evans used it to fuel his ambition and to strive to be the best at everything he does. He enjoyed a special relationship with his father. They often engaged in heated debates regarding national politics and life circumstances in general, but they remained best friends.

Mr. Evans holds a bachelor’s degree in social work and a master’s degree in public administration from the University of Central Florida as well as a master’s degree in business administration with a human resources concentration from Saint Leo University. He has worked for the following communities: the City of St. Cloud, the Town of Celebration, and the City of Largo. In addition, on July 16, 2012, he began working for Haines City as the assistant city manager. On May 16, 2013, Mr. Evans was appointed the acting city manager, and the city commission unanimously appointed him as the new city manager on September 19, 2013. Prior to Mr. Evans’s work in Haines City, he worked for the city manager’s office in the City of Largo for nearly six years as the assistant to the city manager and as the city’s public information officer.

In fall 2016, Mr. Evans left Haines City to serve as an assistant county administrator for Sarasota County. In this role, he oversaw the following community development and infrastructure departments: Planning and Development Services, Public Utilities, Public Works, Sarasota County Area Transit (SCAT), and Economic Development. As part of his responsibilities, he oversaw an operational budget of over $1 billion.

As part of the Riviera Beach vision 2030, Reimagine Riviera Beach was born and spearheaded by Mr. Evans. To address the community’s growing needs and demands, the city had to abandon conventional logic and move forward in an aggressive an innovative matter. This required the city to “reimagine” itself to capitalize on its rich natural amenities and historical traits to renew, revive, and rebuild a city that is diverse, inclusionary, and innovative. This progressive, forward-thinking approach builds on the years of work and effort that predecessors have made. In addition, it breathes new life into plans, ideologies, and philosophies that were never before executed or prioritized. Reimagine Riviera Beach has emerged as the mantra to address multiple aspects of local government. This all-encompassing approach looks to bring synergy to all segments of the government, including the Riviera Beach Community Redevelopment Agency (CRA), the City of Riviera Beach Utility Special District, and the City of Riviera Beach. As a result of Mr. Evans’s leadership, the CRA Board of Commissioners appointed Mr. Evans as the CRA executive director in October of 2020. He created an award-winning process that resulted in a $35 million new affordable housing development referred to as Berkeley Landing, which was the number one project in Palm Beach County pursuant to the review by the Florida Housing and Finance Corporation. Additionally, Mr. Evans worked diligently with FoundCare to attract a federally qualified health center to address some of the comorbidities in the community, which will result in a $15 million-dollar state-of-the-art health-care facility within the CRA boundaries. As result of Mr. Evans’s negotiations, the city was successful in obtaining $2.85 million in new business incubator spaces to complement the development and provide for additional synergy within the Broadway corridor. From property acquisition, to leveraging re-investments in economic development in Riviera Beach Mr. Evans has proven to be a catalyst for the redevelopment.

Within the City of Riviera Beach, Mr. Evans is responsible for more than $226.7 million in budgeted appropriations as well as over 542 employees, a $15 Million annual budget, and 32 additional employees.
Mr. Evans is a full member of the Florida City/County Manager’s Association (FCCMA); he has served on numerous boards for this professional organization and serves as an at-large director on the FCCMA Statewide Board of Directors. In 2019, Mr. Evans served as the secretary-treasurer for the Palm Beach County/City Management Association (PBCCMA), and in 2020, he was unanimously appointed to serve as PBCCMA’s vice president. In October of 2021, Mr. Evans was appointed the Palm Beach County/City Management Association’s chapter president.

He is also a member of the International City/County Managers Association (ICMA) and holds the Association’s Credentialed Manager designation, an accomplishment achieved by only approximately 1,300 local government professionals throughout the United States and Canada. Mr. Evans is a great advocate for continuing education and was recently named a member of the University of Central Florida Public Administration Advisory Board for the School of Public Administration (SPA). He is also an adjunct professor and a Business Advisory Board member at Polk State College. Mr. Evans has a strong understanding of municipal government, a superior work ethic, and a great sense of humor


Coupon Policy: To register with an event coupon from a printed booklet, please call (561) 746-7111. You cannot register with a printed coupon online. If you have a digital coupon, please login to the Member Information Center (MIC) and register for the event online. Coupon registrations will be treated the same as cash registrations and adhere to the event cancellation policy (below). If you register with a coupon and are a no-show, your coupon will still be collected and cannot be used for a future event.    Event Cancellation Policy:   A notice of cancellation must be received by email within 48 hours (2 business days) prior to the event. NO verbal cancellations will be accepted. All cancellation notices received within 72 hours (3 business days) prior to the event will be given an event credit of equal value. Event credits will be applied upon request and are good for up to 1 year from the purchase date. There are NO REFUNDS.   NOTE:
Premier Events (ArtiGras Tickets / Loggerhead Triathlon Registrations) and Special Events (The Leadership Awards Dinner / Holiday Mixer / Business 2 Baseball / Golf Classic / Valor & Community Service Awards) do not qualify for an event credit upon cancellation. Contributions or gifts to the Palm Beach North Chamber of Commerce are not deductible as charitable contributions for federal income tax purposes.